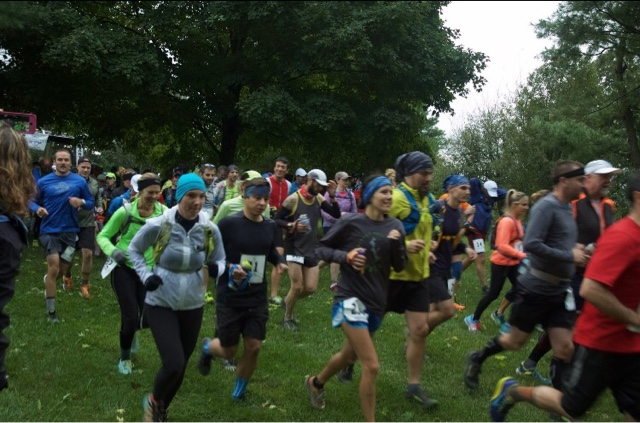 Sunday was an amazing day that I will always remember! The week leading up to race was a rainy mess. We had threats of a hurricane hitting the coast and we were preparing for the worst. My biggest fear was that weather was going to cause the race to be canceled. The show went on and we had no rain on race day. The temps were cool and the sky was overcast as we pulled up to the race. The Blues Cruise 50K Trail Run accepts 400 runners, the event had nearly reached its capacity as the runners were gathering around the Day Use Pavilion at Blue Marsh anxiously awaiting the 8:30 AM start. I felt great. I was confident in my training but still a little nervous about running my longest distance to date. My goal for the day was to finish. 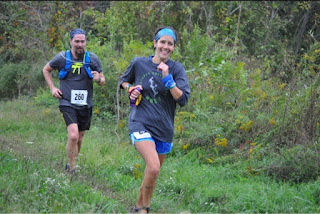 My desired time for the race changed a number of times from when I first signed up for the event. My unrealistic expectation were dismissed while training when I realized how slow my pace got the further I was running on the trails. I was so grateful to arrive at the starting line. I felt so much gratitude as we were waiting for the Go! Once the race got started we were running at the pace of whoever was in front of us. It was very strange to be running in the woods with so many people. I am used to being in the woods with one or two other runners and then encountering only several other runners over the 4+ hours of being out on a trail. I'm sure it was good to have so many people around so I didn't feel tempted to go out to fast. I knew I had to keep my pace under control if I wanted to go the distance. 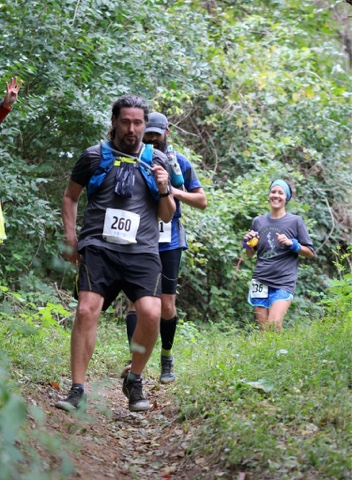 This race was so amazing. The course was beautiful. The volunteers were so friendly and helpful. The 7 aid station were stocked with amazing fuel that matched the needs of many different runners. I was in love with the potatoes and salt what a perfect fuel for an event of this length. I tend to stay away from things that could mess with my gut. My go to source of sugar while running is oranges and of course I was happy to see them at each aid station as well. I would have to say my favorite aid station of all was Fugawi. They were located at about mile 23. They had bean warps and warm apple cider and this vegetarian was in heaven! The warm apple cider seemed to be the most amazing thing I had ever tasted! Thank you. 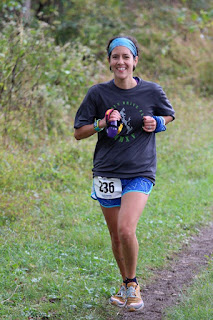 I really felt great during the entire event. My body felt strong my head was clear and I had my running buddy to share the run with. Unfortunately Kelly was not feeling as good as I was and shortly after Fugawi he waved me on and told me to go on without him. We still had some ground to cover and I was afraid to slow down because I wasn't sure how much longer I would be feeling as well as I was. I kept on running and I am grateful to report that my strength kept on until the very end of the race. The last few miles were tough mentally because I knew how close to the end I was but I could never see the finish until I was right on it which now looking back was probably a blessing. I came across the finish line after 6 hours and 18 minutes. I was more then happy with my time for my first 50K. I kept a good pace throughout the event and walked the hills to save my energy. When I got closer to the finish I started to run more hills because I could tell how much  I had left in me.

I almost cried when I crossed the finish line and finally seen my husband there. He made it in time to see me cross the finish line but I did not see him until I was done. It felt great to have him there to share that moment with me. I am so thankful to everyone who helped me cross that finish line. I had so much support from friends and family who watched my kids during my countless hours of training or by just telling me how amazing it was that I was trying to finish a race of that distance. Big thanks to Danielle (Kelly's wife) for making sure we got to the race on time and in one piece. I will rock this awesome finisher zip up with pride! 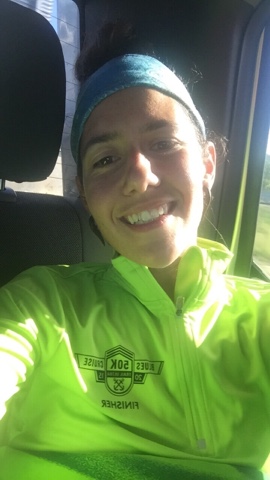 What to Pack for a Ragnar Trail Relay?

June 17, 2015
Months ago when we decided to sign up for the Ragnar Trail Relay in West Virginia I started a list on my phone of what I wanted to pack. I have been known for being a list maker. Thankfully I am not alone in my list making when more than half of my team has an Engineering background it turns out we are all pretty listy. Our one team member even set up a google doc of what to pack so that we can all edit it. I know I'm a nerd but I love being prepared and I love being organized. I started packing over the weekend when I knew I wouldn't be wearing most of my running clothes until race day. For the Relay I will be running 3 times so I made sure to pack three complete running outfits. I found a really helpful tip online to place each outfit in a gallon ziplock bag so I wont have to be searching for everything in the middle of the night or while someone else may be sleeping. The event will be all day and all night so I needed to make sure I packed a headlamp and extra batteries. I
2 comments
Read more

May 06, 2018
I can not possibly put into words the exact feelings I had about crossing the finish line of the NorthFace Endurance Challenge in DC over the weekend. I trained long and hard for this event. I doubted myself over and over again during the weeks leading up to 4/28/18 but knew I had to give it a go.  Driving down to DC the night before the race with my husband and friends I started to feel excited but my nerves were still high. I was thrilled that my husband and Kelly came down to support Miki and I as we attempted another 50 miler.  Lets back track for a moment. In 2016 I trained for a 50 mile event that had a 14 hour cut off. The race was a total wash. It rained the entire week before the race and then the whole duration of the event. The trail conditions were so poor that it made running extremely difficult for me. I spent hours and hours walking a sliding in the mud. My attitude was terrible. I had such high hopes for that event and they were crushed by poor weather. I c
1 comment
Read more

March 05, 2015
Training is not just about crossing the finish line. For me training is about crossing the finish line and not feeling like dog dirt for the next week. I think there are many people that can just cross the finish line on sheer willpower but I do not want to put myself through that type of mental anguish. I know that when I’m doing training runs not only are they beefing up my strength and endurance but they are preparing me mentally for the run ahead. I run to clear my head but after about an hour of running in silence some crazy thoughts can start to pop in. While running on my lunch break on Tuesday I was chatting with one of my buddies/Ragnar teammates about mental thoughts. Saturday while running, I was thinking about how long it would take to get frost bite since I had spilled water all over my glove. This was not an obsessive thought just a passing one but had I been out there for another hour it probably would have turned into an obsession.  The training plan I am sticking
Post a Comment
Read more